It is now well established that Alagille syndrome (ALGS) is caused by a dysfunction in Notch signaling. This dysfunction is driven primarily by pathogenic variants in JAGGED 1 (JAG1) and NOTCH2.

It was only in the second half of the 20th century that the relationship between ALGS and pathogenic variants was first established. Since then, scientists have learned more about Notch signaling and how dysfunction in that signaling pathway is pathogenic. As published in Human Mutation, Gilbert and colleagues conducted a study to gain further insight into this aberrant mechanism.

Gilbert et al sought to characterize pathogenic variation in JAG1 or NOTCH2 in patients with ALGS. They studied 401 probands whose phenotypic characteristics match the clinical definition of ALGS. They also conducted a literature search on studies that contained information regarding JAG1 and NOTCH2 variants and their relationship with ALGS.

This study represents another step in their decades-old investigation into ALGS and the types and frequencies of mutations involved in it. Researchers reported 86 JAG1 pathogenic variants and 3 NOTCH2 pathogenic variants. This brings their total of described variants to 694 for JAG1 and 19 for NOTCH2.

Gilbert et al concluded, “We suggest that [next generation sequencing] strategies may best interrogate the small population of molecularly undiagnosed patients, and that these approaches should prioritize screening of JAG1, NOTCH2, and of other Notch signaling genes and regulatory regions.”

A Far Reach Beyond ALGS

Aberrant Notch signaling is also known to be associated with a large number of diseases, including schizophrenia, osteoarthritis, pancreatitis, multiple sclerosis, and nonalcoholic steatohepatitis.

In Signal Transduction and Targeted Therapy, Zhou and colleagues wrote a brilliant paper examining the pathway from various angles. Notch signaling pathways can be broadly divided into 2 categories: canonical and noncanonical. The mechanisms that regulate Notch signaling are the glycosylation of Notch receptors, the transportation of mature Notch proteins to the cell membrane, the ubiquitylation of ligands in signal-sending cells, and the activation of the whole signaling pathway.

The main link between aberrant Notch signaling and ALGS is the fact that Notch signaling plays an important role in determining the correct morphogenesis of the biliary tree. In healthy individuals, Zhou et al explained, “Active NOTCH signaling, especially mediated by NOTCH2 and JAG1, promotes the expression of transcription factors enriched in bile duct cells, induces the differentiation of hepatocytes toward bile duct cells, and promotes the formation of the bile duct plates.”

Researchers have observed through mice studies that a high level of Notch1 signaling was protective of hepatocytes in events of ischemia-reperfusion injury. In addition, Notch signaling promotes biliary tract repair in incomplete liver injury. This damage repair is mainly facilitated by NOTCH2, which is consistent with findings that suggest that NOTCH2 signaling is involved in the differentiation and selection of liver progenitor cells during development.

The Key Role of the Liver

Liver pathology is usually the most prominent feature of ALGS, characterized by a lack of interlobular bile ducts. This then causes jaundice, cholestasis, and pruritus. But, ALGS is a multi-organ disease that also negatively impacts the heart, bones, vasculature, and eyes.

In children who are diagnosed with chronic cholestasis, ALGS is one of the most likely culprits. This is consistent with findings that JAG1 and NOTCH2 are involved in bile duct development and subsequent morphological maintenance. Symptoms somewhat resolve with age, but the definitive treatment for ALGS remains liver transplantation.

Much research into ALGS has been conducted on mice models. This is made possible by the construction of mice that are homozygous for a missense mutation in JAG1, which causes the mice to recapitulate all of the features of ALGS, such as the classic absence of bile ducts, as well as defects in the heart, vasculature, and eyes.

In light of our growing understanding of the genetic pathology that drives ALGS, there are increasing attempts to find a curative solution for this disease. Previously successful attempts in other disease areas suggest that global collaboration is the way forward.

In Diagnostics, Ayoub and Kamath reported that the Global Alagille Alliance (GALA) Study was recently established in order to investigate the genotype-phenotype correlation in ALGS and look into clinical and molecular predictors of disease outcomes. They wrote, “The collective effort of this international collaborative consortium from more than 20 countries will deepen our understanding of ALGS, its natural history and disease burden.” 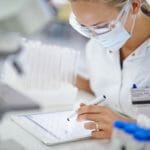 The Ethical Dilemma of Conducting Studies on Pregnant Women With ALGS