Alagille syndrome (ALGS) is a multisystem disease that is inherited in an autosomal dominant manner. Although it has variable phenotype penetrance, there are a number of clinical manifestations typically associated with it.

Patients with ALGS may present with bile duct paucity, chronic cholestasis, characteristic facial features, and ocular, skeletal, and vascular abnormalities. They also may have cardiac disease and renal disease.

A suspicion of ALGS is usually raised when a patient meets at least a few of the characteristic clinical features described. This is especially true when cholestasis and bile duct paucity are discovered without an obvious alternative cause. Genetic testing is usually carried out to confirm the diagnosis.

The features of ALGS that are most commonly described relate to the liver. Recent studies report that bile duct paucity is found in 75% of Alagille syndrome patients and cholestasis in 89%. The degree of severity of cholestasis varies between individuals.

“In a recent prospective study of liver disease outcomes in ALGS [Alagille syndrome], the morbidity was much higher than previously reported,“ Mitchell and colleagues wrote in Clinics in Liver Disease. “The cohort was limited to those patients presenting with cholestasis, but 50% had ascites, 25% had at least 1 episode of variceal bleeding, and only 20% survived childhood with their native liver.”

As published in the Journal of Pediatric Gastroenterology and Nutrition, Kamath and colleagues conducted a systematic review on the epidemiology, natural history, and burden of ALGS and likewise found that liver-associated pathology, including pruritus, was most often described in patients. Pruritus affected around 59% to 88% of patients, and around 45% of patients reported experiencing severe pruritus.

Rarer, and more rarely mentioned, are the neuroradiological manifestations of Alagille syndrome. D’Amico and colleagues reported in the British Journal of Radiology that skull malformations are the second most common bone anomaly in patients with ALGS, with a prevalence of 0.9% (compared to 0.03% in the general population).

Craniosynostosis (the premature fusion of cranial sutures) is one skull abnormality that has been reported in patients with the disease. It can be simple or complex, with simple presentations being more common. An explanation for why craniosynostosis occurs in ALGS is that JAG1 plays a major role in the development and fusion of skull sutures.

Another skull anomaly that has been reported in ALGS is Chiari malformation type 1. The exact pathophysiology of this malformation is unknown but is thought to be in part related to the underdevelopment of the bones of the posterior fossa. D’Amico and colleagues wrote, “This malformation is defined by cerebellar tonsil caudal tip descent of more than 5 mm past the foramen magnum.”

Cerebral malformations have been reported in ALGS and are thought to be caused by the role that Notch plays in the development of the corpus callosum. In their review, D’Amico et al reported 2 cases of midline brain abnormalities: the first with “mild hypoplasia of the splenium and the isthmus of the corpus callosum and concomitant bilateral incomplete hippocampal inversion,“ and the second with isolated agenesis of the septum pellucidum.

Patients with ALGS are often thought to have facial features “described as triangular and [including] a prominent forehead, deeply set eyes, moderate hypertelorism, pointed chin, and [a] bulbous tip of the nose,” Mitchell et al wrote. However, the use of facial features in diagnosing the disease is controversial, since they are subjective in nature and a wide variation exists in the general population. Once again, genetic testing provides for a more robust proof of disease and should be conducted when ALGS is suspected.

Vertebral anomalies are present in about 51% to 66% of patients with ALGS. A possible cause is, once again, the role that Notch signaling plays during somitogenesis and the development of the craniovertebral junction. In medical imaging, butterfly vertebra and hemivertebra are among the most commonly reported vertebral malformations in ALGS.

“Butterfly vertebra is characterized by the presence of a central sagittal cleft in the vertebral body, caused by failed fusion of lateral chondrification centers during spinal embryogenesis due to aberrant persistence of notochordal tissue,” D’Amico et al wrote. This malformation can either be partial or complete; either way, it is often asymptomatic. Meanwhile, scientists have theorized that hemivertebra is driven by the impaired development of one of the paired chondrification centers during embryo growth.

The main reason physicians should be aware of these extrahepatic findings of ALGS is that they can corroborate clinical suspicion of the disease and lead to appropriate investigation. Without adequate clinical suspicion, patients with ALGS are unlikely to undergo a genetic test and thus remain undiagnosed and often untreated. 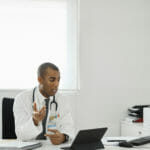