Alpha-1 antitrypsin (AAT) is a protein primarily secreted in the liver; in patients with alpha-1 antitrypsin deficiency (AATD), this secretion is greatly reduced. The liver and the lungs are the 2 organs most affected by AATD.

Let’s first discuss its effects on the lungs. The most common manifestation of AATD in the lungs is chronic obstructive pulmonary disease (COPD) and/or panlobular lung emphysema. The pathological impact of AATD on the lungs is the leading cause of death among patients with severe AATD. Fortunately, AAT augmentation therapy can slow down pulmonary deterioration.

Although its impact on the lungs is the most deadly, AATD can also result in significant liver damage. There are a few different mutations that can lead to an AATD phenotype, but the most harmful is the Pi*ZZ mutation. Hamesch and colleagues, in their study on AATD, cited the Pi*ZZ mutation as the one that deserves particular concern: “Severe AATD is caused mainly by the homozygous Pi*Z mutation (Pi*ZZ genotype, protease inhibitor). Pi*ZZ carriers are highly susceptible to early-onset lung emphysema and liver disease, representing the major cause of AATD-related mortality.”

Below, we will be focusing on the impact of AATD on the liver. Fromme et al, in their study describing the negative impact of AATD on the adult liver, gave a preview of the damage it causes in their introduction: “The mutations [causing AATD] lead to enhanced protein degradation and/or aggregation in the endoplasmic reticulum (ER) of hepatocytes, thereby causing proteotoxic liver stress and damage.”

First, we will summarize the findings of Hamesch et al, who conducted a detailed study on the relationship between AATD and hepatic damage. Following on from their assertion that the Pi*ZZ mutation is the most deadly, they examined the existing medical literature of its impact on liver fibrosis and found it wanting.

“Due to the shortage of knowledge, in particular with regard to non-invasive assessment of liver fibrosis burden, the current management of adult Pi*ZZ patients is based primarily on measurement of serum liver enzymes, although it has been described that they fail to reliably predict the course of disease,” they wrote. “We performed, to our knowledge, the largest systematic assessment of liver disease burden and laboratory parameters in a multinational cohort of Pi*ZZ carriers.”

The research team examined 554 Pi*ZZ carriers and 234 Pi*Z noncarriers from multiple nations across Europe. The sources they used included data from patient advocacy groups, physicians, and national AATD registries. Of the 554 adults with the Pi*ZZ genotype, 403 were placed in the exploratory cohort, and 151 in the confirmatory cohort. Most carriers they examined had a preexisting diagnosis of AATD.

Their study was mainly focused on the impact of the Pi*ZZ genotype on liver disease (although a short section was devoted to lung damage). The researchers measured the degree of liver fibrosis, as well as controlled attenuated parameter (CAP) as a surrogate for liver steatosis. They also investigated transgenic, sex-matched mice overexpressing the human Pi*Z variant (aged between 8 and 12 weeks) and their nontransgenic littermates.

Interestingly, Hamesch and colleagues discovered that 90% of Pi*ZZ carriers underwent regular lung checkups, but only half of them (45%) underwent measurements of their serum liver enzymes at least annually, while a mere 21% received regular liver ultrasound scans.

Results of the study demonstrated that 23.6% of Pi*ZZ carriers demonstrated liver stiffness measure (LSM) of 7.1 kPA or greater (compared to 6.4% of noncarriers), which indicated significant liver fibrosis of at least stage 2. When the percentage of Pi*ZZ carriers with LSM of 10.0 kPA or more were measured, the results were even more pronounced: 13.6% of carriers met that threshold (compared to 1.3% of noncarriers), which was suggestive of advanced liver fibrosis of at least stage 3.

As for CAP results, Pi*ZZ carriers had higher mean values than noncarriers, suggesting the presence of mild to severe steatosis. This was mirrored in their studies of transgenic mice overexpressing the Pi*Z variant: the mice demonstrated more steatosis than their nontransgenic littermates.

Fromme and colleagues wrote an outstanding study detailing many facts of what we now know about how AATD and liver pathology are linked. When comparing the extent of liver fibrosis between Pi*ZZ patients and Pi*SZ patients, they discovered that Pi*SZ individuals demonstrated a substantially lower liver fibrosis burden. In addition, they cited a study by Clark and colleagues that found that the prevalence of clinically significant liver fibrosis (of grade 2 and above) was 35.1% among 94 adult Pi*ZZ biopsies examined.

From the medical reports of participants in a separate study, researchers discovered that the risk of Pi*ZZ participants developing liver cirrhosis/fibrosis was 20 times higher than in noncarriers. Curiously, “only a minority of individuals with AATD display liver enzymes outside the normal range,” Fromme and colleagues reported.

Clearly, we are left with the irrefutable conclusion that Pi*ZZ carriers are at a greater risk of liver damage. However, further questions need to be resolved. Fromme provided a few angles from which future research can be conducted: finding out whether the mechanisms underlying pediatric and adult liver disease in Pi*ZZ individuals are identical and identifying the most effective clinically relevant endpoints for evaluating the efficacy of investigational therapies. 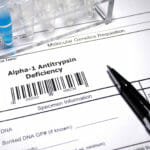 Addressing Protein Misfolding in AATD Could Lead to Improved Therapies