Several recently published studies may help enhance our treatment of spinal muscular atrophy (SMA). Review key points of some of them below.

Evaluating a Novel Myostatin Inhibitor as an SMA Treatment

A new article in Advances in Therapy describes a phase 1 trial of a monoclonal antibody intervention being developed as a treatment for SMA1. The therapy, apitegromab, was administered intravenously in ascending doses to patients with SMA. The effects were compared across those receiving single-dose regimens, double-dose regimens, and placebo.

The double-blind trial, aimed at evaluating safety and assessing relevant pharmacokinetic and pharmacodynamic factors, found that the drug was well-tolerated and appeared safe. Administration of apitegromab did not significantly affect vital signs, electrocardiogram findings, or clinical laboratory results. Further, it did not lead to the formation of anti-drug antibodies.

Both single and multiple-dose regimens were associated with dose-dependent increases in serum latent myostatin. Based on these findings, the authors argue that apitegromab should be further investigated for its potential value in milder forms of SMA.

Exploring the Effect of Nusinersen on Respiratory Function

Nusinersen is known to improve the functioning of peripheral muscles in people with SMA, but its impact on respiratory function has thus far been largely unexplored. A new article in Thorax describes an observational study on the effects of nusinersen on pediatric patients with SMA types 1, 2, and 3 who began treatment with nusinersen between 2018 and 2019 in Queensland, Australia.2

Nusinersen appeared especially helpful for performance on the total Apnea-Hypopnea Index (AHI), which tests for sleep apnea. These results suggest that in addition to improving muscle function, nusinersen may also provide value with respect to respiratory function in those with SMA.

A new study published in the International Journal of Molecular Sciences has employed a functional proteomic strategy to characterize the biochemical response to nusinersen therapy.3 By evaluating the protein profiles of cerebrospinal fluid from SMA type 1 patients undergoing nusinersen treatment, the researchers identified significant upregulation of apolipoproteins A1 and E as well as transthyretin proteoform variation, all of which are implicated in problematic processes that occur in SMA. These findings suggest that these lipoproteins and transthyretin may serve as useful biomarkers to monitor both disease progression and treatment response in SMA patients. 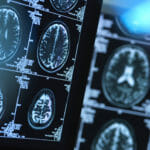