Before his life got turned upside down, Gerald Fischer was a top manager at one of Europe’s largest tour operators, traveling the world on behalf of leading Austrian celebrities while running his family’s thriving liquor business as a fifth-generation distiller.

Everything changed in 1998, the year Fischer’s frail 3-year-old daughter Maleen was diagnosed with pulmonary arterial hypertension (PAH). At the time, not a single clinic or hospital in Europe was set up to treat children with the rare and incurable disease.

“The doctors told me there was nothing they could do, and that Maleen wouldn’t reach the age of 10. I couldn’t believe it,” Fischer said. Desperate for answers, he began calling his colleagues in the pharmaceutical industry. “I had all the pharma companies as my clients, so they immediately helped me find the one place in the world where my daughter could be treated: Presbyterian Hospital in New York.”

There, pediatric cardiologist Dr. Robyn Barst started Maleen on an intravenous treatment via a permanent cannula that has kept her alive ever since. When Fischer asked Dr. Barst what could be done about PAH, she told him: “Give me $10 million and I will find you a cure in three years.”

Dr. Barst died of lung cancer in 2013 and there’s still no cure for PAH — but that hasn’t stopped Fischer, now 62, from raising money to find one. In 2002, he established the nonprofit organization PH Austria as his country’s leading charity for Austrians with the disease and the following year he cofounded the umbrella group PHA Europe.

Today, PHA Europe encompasses 33 national patient associations in 27 countries (Bulgaria, Italy, Russia, and Ukraine each have 2 associations as members, and Spain has 3). Among other things, the Vienna-based group helped popularize May 5 as World PH Day to raise awareness of the disease.

“Awareness leads to earlier diagnosis, and an earlier diagnosis is our main objective,” he said, adding that he believes half of all PH patients die without ever having been properly diagnosed.

But a definitive diagnosis can only be made by an invasive right-heart catheterization procedure. And the lack of an international registry makes it difficult to know how many PH patients there are.

One of the biggest challenges in Europe, Fischer said, is getting PAH patients to sign up for clinical trials for potential therapies, given the rarity of the disease, which targets females 3 to 5 times more often than males.

“We try to convince our patients to take part in trials, but how many trials can a rare disease handle?” Fischer said. “You have very few patients, and each trial has requirements. If you do a trial in cancer, diabetes, or high blood pressure, you have a pool of millions of patients. But with a rare disease, the pool is very limited, and the criteria have to work.”

PHA Europe operates on an annual budget of around 600,000 euros (approximately $733,000). It has 4 paid staffers including Fischer, as well as 6 board members. The charity’s key corporate sponsor is Janssen, the Belgian subsidiary of Johnson & Johnson.

Other major pharmaceutical industry supporters include Bayer, MSD, Novartis, United Therapeutics, and Pfizer, as well as Gossamer Bio, which is currently developing seralutinib to treat PAH.

A crucial goal of PHA Europe is getting patients universal access to treatment, regardless of where they live. Another, Fischer said, is turning local associations into “service centers” for patients — complete with up-to-date websites, a 24/7 patient hotline and government financial support — “so that they can live with the disease and forget about it for a few hours a day.”

“We’ve started associations in those countries where access to treatment was a problem,” he said. “For example, in Austria, you get treated, while in Hungary you didn’t. This was unacceptable. There are still many former communist countries in Eastern Europe where treatment for pulmonary hypertension is not available.”

‘As If There Were No Tomorrow’

To that end, PHA Europe has enlisted help from prominent politicians including former Austrian Chancellor Werner Faymann to help get its message across. In 2016, Fischer stepped down as president of the charity he founded, though he continues as managing director.

Now running the organization is Belgrade novelist Danijela Pešić, co-founder of PHA Serbia, who has struggled with the disease her entire life. PHA Europe’s project manager is Hall Skåra, a Norwegian computer scientist and former IBM executive with PAH who joined the staff in 2013.

Various therapies exist for people with PAH, including calcium channel blockers that lower blood pressure by relaxing the muscles that control the arteries. Blood thinners prevent clots, while diuretics ease the symptoms of PAH by keeping excess fluid out of the body. Other common medications for PAH include bosentan (Tracleer®), ambrisentan (Letairis®), selexipag (Uptravi®), sildenafil (Viagra®), and tadalafil (Cialis®).

“Yet the treatment is often more dangerous than the disease, because of the risk of sepsis. If you have any bacteria in that tube, it can easily cause sepsis and multi-organ failure. This is what kills people on IV treatments over a long period,” Fischer said, adding: “We are all looking for safer treatments which are on the way and in some cases already available. But the treatment my daughter got was the most effective at the time.”

Since then, Maleen — who lives in Vienna — has become an outspoken champion of people with rare diseases, and particularly those with PAH. In 2015, the young woman wrote a 175-page book, As If There Were No Tomorrow: Hope Springs Eternal, about the challenges of living with PAH. She’s now 26 and studying creative writing at Harvard University in Cambridge, Massachusetts.

“This disease can affect anyone at any age. And because it is still a rare disease, if a person is not diagnosed, it can lead to death within a few years,” Maleen said in a recent podcast funded by Actelion, Acceleron, Bayer, CVS, PhaseBio and United Therapeutics.

“I’ve opened up my life and my situation so that people might become interested, or perhaps easily identify with another disease in order to build this awareness,” she said. “What’s most important is that this disease is not ignored, and that no one else dies from it. That would be my ultimate goal.” 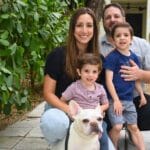