Those patients included a multinational ad agency executive whose career was cut short by MS-related cognitive dysfunction; a pharmacist who could no longer keep up with the fast-paced hospital environment where she worked because her processing speed had declined; and a respected economist whose MS-related paranoia left him alienated from family and colleagues.

But those aspects of MS have long been overlooked, said Dr. Feinstein, a professor of psychiatry at the University of Toronto, in the Canadian province of Ontario.

“MS has always been regarded as predominantly a neurological condition. Things started to change around the time I completed my PhD, which was in the early 1990s,” said Dr. Feinstein, who is also director of the neuropsychiatry program at Sunnybrook Health Sciences Centre, a university‑affiliated hospital in Toronto.

“From the 1990s, the field took off. Now, there’s a fairly large literature devoted to this theme, but there’s still a lot of education to be done,” said Dr. Feinstein, speaking to Rare Disease Advisor by phone from his native Johannesburg, South Africa. “Neurologists still need to be educated about the behavioral consequences of MS.”

In fact, that’s the focus of Dr. Feinstein’s new book, Mind, Mood and Memory: The Neurobehavioral Consequences of Multiple Sclerosis.

The 256-page volume explains how cognitive rehabilitation may help improve processing speed, memory, and executive function deficits in people with MS and what data from structural and functional brain magnetic resonance imaging (MRI) tell us about depression and cognitive dysfunction in people with MS.

“Cognitive difficulties can affect anywhere between 40% to 90% percent of people with MS, depending on their disease cause,” Dr. Feinstein said. “Depression will affect 1 in 2 individuals with MS over the course of their lifetime. Symptoms of anxiety may be even more frequent.”

The Powers of Brain Imaging

The understanding of these issues deepened once the MRI emerged as a powerful investigative tool in medicine, he said.

“MRI transformed the study of multiple sclerosis, because suddenly, you had this very powerful window into the brain,” Dr. Feinstein explained. “Prior to that, we had the CT scan, but a CT scan is not particularly sensitive in visualizing the lesions associated with multiple sclerosis. MRI, on the other hand, is extremely sensitive in revealing these lesions. That started a whole new line of research looking at neuropsychiatry of MS.”

Suddenly, he said, researchers could see evidence of atrophy or brain shrinkage, confirming suspicions that these lesions had behavioral consequences.

MS patients often suffer from depression, and Dr. Feinstein suggested that cognitive behavior therapy (CBT) is the preferred method of treating depression in people with MS—regardless of whether the patient has relapsing-remitting MS or the secondary progressive form of the disease.

“The antidepressant literature is a small one, and we know that people with MS may be susceptible to some of the side effects of antidepressant medication,” he said. “With something like cognitive behavior therapy, there are, of course, no side effects. It’s a very effective way of helping people overcome depression.”

Interestingly, although MS strikes 3 women for every man, “when you look at the literature, in fact, there is no sex difference [in depression occurrence]. The rates of depression in men and women were similar. That suggests that we’re looking at a brain mechanism causing depression—a neural basis for depression that transcends sex.”

A Resource for Clinicians, Patients, and Their Families

Dr. Feinstein said he wrote Mind, Mood and Memory so that it would have crossover appeal.

“I wanted it to be helpful not just to neurologists or neuropsychiatrists or psychologists, but would also be of interest to people with multiple sclerosis and their families as well.”

The book’s chapters focus on topics such as depression, psychosis, and the pseudobulbar affect—a common phenomenon in MS patients that’s characterized by episodes of sudden uncontrollable and inappropriate laughing or crying. Among the specific challenges his book addresses:

This is Dr. Feinstein’s seventh book; he’s also researched and written extensively about the psychological effects of conflict on journalists. In 2000, he won a Guggenheim Fellowship to study mental health issues in post-apartheid Namibia, and in 2012, he produced a Peabody Award-winning TV documentary, “Under Fire,“ based on his research on combat journalists.

Dr. Feinstein said the past 2 years—dominated by COVID lockdowns and anxiety over infections and vaccines—have clearly made things worse for people with multiple sclerosis.

“Clearly, the pandemic has been a very difficult time for people, and the impact on individuals with multiple sclerosis can be considerable. It’s been harder for individuals to access clinical care,” he said, adding that “they’ve not seen a neurologist as frequently. The social isolation for some people has been very difficult.” 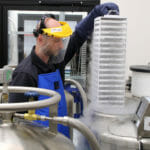