Stephanie Harry’s son, Christopher, has a small claim to fame: he was among the first babies born in Georgia whose long chain fatty acid oxidation disorder (LCFAOD) was detected by the state’s newborn screening program.

“He’s been on medical formula since birth. His first metabolic crisis wasn’t until he was almost 4. That sent him to the hospital for a week with rhabdomyolysis, because he was coughing so much, he couldn’t keep his food down,” Stephanie Harry said. “But overall, Christopher has done really well, except for these occasional bouts with [rhabdomyolysis].”

Stephanie and her husband Ryan, a physical education teacher, live in Atlanta. The family frequently goes hiking and backpacking in the nearby mountains. Christopher, now 13, also plays baseball, rides his bike, and is, in general, “a very active kid,” said his mother—though obvious precautions must be taken.

“Christopher has to eat every 2 hours, and more often if he’s backpacking,” she said. “It can be very scary. If he stops eating, his body can’t use fat for energy, so it starts breaking down muscle instead.”

Born and raised in Sunapee, New Hampshire, Rechisky used a feeding tube for the first 2 years of her life. Growing up, she had to take precautions that other kids didn’t have to, such as carrying snacks and Gatorade with her at all times and making sure not to overexert herself.

“I had a very normal childhood. I played sports, went to sleepovers, had birthday parties,” she said. “It wasn’t until adolescence that the symptoms began. I started to have muscle pain and [rhabdomyolysis]. I wasn’t able to keep up in sports and started missing a lot of school. I was hospitalized 5 or 6 times in the span of 3 years; once it was so severe I stayed in the hospital for 2 weeks.”

It became obvious that her previous medication, medium-chain triglyceride (MCT) oil, was no longer effective as a supplement, so at age 14, Rechisky’s doctor suggested she join a clinical trial for triheptanoin being launched by Baylor University in Houston, Texas. That trial was eventually transferred to Pennsylvania’s University of Pittsburgh, under the supervision of Jerry Vockley, MD, PhD, scientific advisor for the International Network for Fatty Acid Oxidation Research and Management (INFORM).

Triheptanoin, marketed by Ultragenyx as Dojolvi®, is the only therapy approved by the US Food and Drug Administration (FDA) to treat LCFAOD. Taken with food 3-4 times a day, this extensively hydrolyzed drug provides up to 35% of a patient’s daily caloric intake.

“I make my own smoothies and put Dojolvi in them. It also works with milk, or anything dairy because it emulsifies the oil, but you could also put it in applesauce or juice,” Rechisky said. “I definitely can’t fast for too long, especially if I’m doing physical activity. But at least now I’m able to sleep through the night and not have to wake up and eat.”

Nicola Longo, MD, PhD, is a professor of pediatrics and chief of the University of Utah’s Division of Medical Genetics in Salt Lake City. He’s also an expert in LCFAOD and the role of carnitine—a natural chemical found mostly in the muscle—in burning fat. Primary carnitine deficiency affects 1 in 70,000 to 80,000 people worldwide.

“Carnitine is required for the oxidation of fat by mitochondria. When people lack carnitine, they become unable to burn fat when fasting, and can present with muscle pain during exercise,” Dr. Longo told Rare Disease Advisor, adding that in some cases this can cause severe hypoglycemia, acute heart blockage, and sudden death.

“Thanks to therapy, these patients—if they receive high doses of carnitine—can do very well,” said Dr. Longo, who received both his medical and doctorate degrees in molecular biology and pathology from Italy’s University of Parma. “However, there are many other disorders in which fatty acid oxidation is impaired, for which we didn’t have any type of therapy until very recently.”

Patients who have switched from MCT oil to triheptanoin have improved their cardiac function, Dr. Longo said.

“We still do not know if Dojolvi improves muscle function. In general, any patients with long chain fatty acid oxidation disorder develop muscle pain and muscle breakdown when they exercise, even with regular exercise,” he said. “As a result, myoglobin, which is present within the muscle, can be released and can cause even kidney failure. We still do not know if Dojolvi can prevent this outcome.”

Meanwhile, Stephanie and Christopher Harry carefully monitor Christopher’s food intake and spread MCT oil on his food, which adds about 10 grams of fat per day to his diet. For added protection, Christopher wears a Fitbit so his parents know how many steps he’s taking, which tells them how many calories he’s burning.

“Christopher is a very outgoing child. He’s very creative and loves to sing and write,” said his mom, who recently worked on Georgia state legislation to get medical foods covered by insurance. She’s also written a children’s book published by Emory University titled My Special Body and geared toward young children with LCFAOD.

As for Rechisky, she recently graduated from Boston University and currently works as a government contractor in research and development.

“I still make sure I’m eating low-fat food and not fasting. I eat smaller portions of food more often, I take my Dojolvi as well as carnitine and a whole slew of vitamins,” she said.

Rechisky added: “I’ve been very lucky because I had access because I live in Boston—a medical and biotech hub—and I had doctors who were specialists and who were able to funnel me into clinical trials. It’s something I think about a lot. That’s not the case for everybody.” 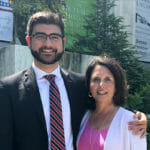