An updated set of clinical practice guidelines has been issued for the diagnosis and treatment of idiopathic pulmonary fibrosis (IPF) and progressive pulmonary fibrosis (PPF) in adults. This body of work is the result of a collaboration between the American Thoracic Society, the European Respiratory Society, the Japanese Respiratory Society, and the Asociación Latinoamericana de Tórax (ALAT).1

The update addresses the role of evolving practices and techniques such as transbronchial lung cryobiopsy (TBLC) and genomic classifier testing in the diagnosis of IPF. The radiologic and histopathologic features of usual interstitial pneumonia and updated diagnostic criteria for IPF are also discussed.

Q: Should patients with newly detected ILD of undetermined type who are clinically suspected of having IPF undergo TBLC to obtain samples to make a histopathological diagnosis?

A hallmark finding of high-resolution CT (HRCT) in IPF is a pattern of usual interstitial pneumonia (UIP). This finding is not specific to IPF and may also be seen with fibrotic hypersensitivity pneumonitis, connective tissue disease, and exposure-related ILD.

When imaging for IPF, there are 4 HRCT patterns described, each with a varying degree of clinical certainty that the CT findings would correlate with a histopathologic pattern of UIP on biopsy. Features of the UIP pattern are:

There is more than 90% confidence that this collection of findings on HRCT would yield histologic findings compatible with UIP. Confidence levels associated with a probable UIP pattern, and indeterminate for UIP pattern are 70%-89% and 51%-69%, respectively.1

TBLC is being increasingly adopted for the application of histopathological criteria for UIP but there are limitations. Firstly, the subpleural predominance of pathologic changes may not be readily appreciated. Additionally, the potential for sampling error results in less confident exclusion of features that may suggest an alternative diagnosis and TBLC is more likely to yield a probable UIP pattern compared to surgical lung biopsy (SLB).

After a review of the current evidence, the diagnostic yield of TBLC varied (80%-90%) between studies; however, this was primarily due to differences in methodologies. It appears that the diagnostic yield hinges upon the standardization of protocols and experience between institutions.1

The committee concluded that TBLC may be considered an acceptable alternative to SLB in experienced centers that have standardized their protocols to include steps to minimize risk and maximize diagnostic yield.1

Q: Should genomic classifier testing be performed for the diagnosis of UIP in patients with ILD of undetermined type who are undergoing transbronchial forceps biopsy?

A genomic classifier equipped with machine learning and whole transcriptome RNA sequencing capabilities has been developed to identify UIP in transbronchial lung biopsy samples. The classifier has been proven useful, with a specificity of 78%-100% and a sensitivity of 59%-80% for this purpose.1,5 However, its utility in diagnosing UIP in patients with ILD of undetermined type who are undergoing transbronchial forceps biopsy has not been conclusively established.1

Q: Should patients with IPF and GER, with or without symptoms of GERD, be treated with antacid medications to improve respiratory outcomes?

Previous guidelines based on observations recommend the use of antacid medication in patients with IPF to improve respiratory outcomes. Up to 90% of patients with IPF have gastroesophageal reflux (GER) and the prevalence of hiatal hernias has also increased in this population. Additionally, theoretical microaspiration of stomach content might worsen disease progression.

There is low-quality evidence that antacid therapy may be associated with a survival benefit and a reduction in forced vital capacity (FVC) decline and exacerbations.6,7 A meta-analysis of 3 observational studies showed no difference in the change of percentage predicted FVC in patients taking antacids versus those who did not take antacid medication. Moreover, a randomized trial found that taking omeprazole was associated with lower FVC and percentage predicted FVC after 90 days; a finding that is contrary to the expectation that antacid medication is beneficial.1

The committee acknowledged there are no definitive benefits from antacid therapy and made a conditional recommendation against the use of antacid medication for the sole purpose of improving respiratory outcomes. However, antacid therapy may be beneficial in patients with established GER and may be indicated to improve GER-related outcomes in patients with IPF who have symptoms of gastroesophageal reflux disease (GERD).1

Q: Should patients with IPF and GER, with or without symptoms of GERD, be referred for anti-reflux surgery to improve respiratory outcomes?

Furthermore, available research does not provide any evidence that anti-reflux surgery improves mortality, exacerbations, and hospitalizations, or lung function. Surgical complications occur in up to 15% of patients, with dysphagia, abdominal distension, and nausea being the most frequent.1

The committee does not suggest referring patients with IPF for anti-reflux surgery for the purpose of improving respiratory outcomes. However, they said these procedures may be of value for improving GER-related outcomes in select patients with established GERD and IPF.1

Part 2: Diagnosis and Treatment of PPF in Fibrotic ILD

Prior to this report, physiologic criteria for the definition of PPF had not been formally proposed due to a paucity of published data. The committee defined physiologic evidence of disease progression as either an absolute decline in FVC ≥5% predicted within 1-year of follow-up or an absolute decline in DLCO (corrected for Hb) ≥10% predicted within 1-year of follow-up.1

The progression of fibrosis is usually assessed visually using HRCT to compare recent and previous images to determine the increase of fibrotic features or lack thereof. Radiologic evidence of disease progression is confirmed if one or more of the following exist:1

A patient with ILD of known or unknown etiology other than IPF with radiologic evidence of pulmonary fibrosis is defined as having PPF if at least 2 of the criteria below occurred within the last 12 months with no alternative explanation:1

ILDs other than IPF that manifest with PPF are grouped into 5 main categories: idiopathic interstitial pneumonia, autoimmune ILD, exposure-related ILDs, ILDs with cysts and/or airspace filling, and sarcoidosis. Disease entities contained within each group can be found in figure 12 of the cited report.1

The committee offered updated PPF treatment recommendations in this report. They reviewed the available evidence for the treatment of ILD and reviewed the role of antifibrotic agents pirfenidone and nintedanib in the management of these patients. The questions, considerations, and conclusions of the committee are discussed below.1

Q: Should patients with PPF be treated with pirfenidone?

Pirfenidone is approved by the US Food and Drug Administration for the treatment of IPF, but its mechanism of action remains unknown.8 The role of pirfenidone in PPF is theoretical; it’s postulated that it might slow the progression of fibrosis through its anti-inflammatory, antioxidative, and antiproliferative effects.

In the medical literature, pirfenidone appears to have no statistically significant effects on mortality, lung function, or respiratory symptoms in patients with IPF. There is low-quality evidence that it may improve disease progression.1

Q: Should patients with PPF be treated with nintedanib?

The use of nintedanib appears to be beneficial in slowing disease progression as evidenced by the INBUILD trial. The difference in annual decline in FVC in patients with a UIP pattern who took nintedanib was 128 mL/year. In this group, the risk of progression was decreased by 2.4 times. It is worth noting that in patients with a non-UIP pattern, the improvement in FVC decline was 75.3 mL/year and the change in risk of disease progression was not statistically significant. There is no evidence that nintedanib improves all-cause mortality or fatal adverse events.1

The committee agreed to a conditional recommendation for the use of nintedanib and recommend research into the efficacy, effectiveness, and safety of nintedanib in specific types of non-IPF ILD manifesting PPF.1 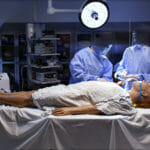