BOSTON, Massachusetts—With more rare disease therapies than ever winning approval from the US Food and Drug Administration (FDA), things are looking up for the 30 million or so Americans whose illnesses are considered rare—meaning they affect fewer than 200,000 people.

Yet the outlook is considerably more complicated than that, says Annie Kennedy.

As chief of policy, advocacy, and patient engagement at the EveryLife Foundation for Rare Diseases, Kennedy knows that firsthand. Before coming to the Washington, DC-based nonprofit 3 years ago, she was senior vice president of advocacy at another charity: Parent Project Muscular Dystrophy (PPMD), whose mission is to find a cure for Duchenne muscular dystrophy.

And before that, Kennedy worked with the Muscular Dystrophy Association for nearly 20 years.

“There’s more opportunity now than there has ever been in rare disease. That’s because of the activation of the rare disease community in partnership with our biopharmaceutical partners,” she told Rare Disease Advisor. “But development is more complex than ever, and so is access.”

Kennedy, interviewed on the sidelines of the 2022 World Orphan Drug Congress here, said “this is a really important time” in Washington, given that rare disease patients currently wait an average of 6.3 years before receiving a confirmed diagnosis, and that the FDA’s process for approving a rare disease drug takes an average of 15 years.

EveryLife was established in 2009 by Emil Kakkis, MD, a renowned geneticist, He did so after saving the life of a child named Ryan Dant who had mucopolysaccharidosis 1 (MPS 1), which at the time had no known treatment.

Despite positive results, however, the FDA required a second trial for laronidase—adding years and millions of dollars before it approved the drug. That led Dr. Kakkis to start EveryLife as a way of pushing for legislative and policy changes to benefit rare disease patients. In 2017, Ryan’s father, Mark Dant, became chairman of EveryLife’s board. Dr. Kakkis later went on to become founder and CEO of Ultragenyx.

Kennedy’s organization recently fought to preserve an obscure regulation known as the Prescription Drug User Fee Act, which must be renewed every 5 years.

PDUFA, as it’s known, was enacted by Congress in 1992 during the height of the HIV/AIDS crisis. The act allows the FDA to collect fees from pharmaceutical manufacturers for the drug approval process at 2 points: when a New Drug Application (NDA) or Biologics License Application (BLA) is submitted and after approval of the application.

Kennedy said that during the legislation’s previous 5-year cycle, known as PDUFA VI, “we saw the innovation of patient‑focused drug development and patient experience data pulled into clinical trial design and regulatory decision‑making.”

That’s why it’s so important, she said, “that the development of therapies for our smaller disease spaces, which we often refer to as ultra‑rare diseases, are given priority.”

On September 30, 2022, President Biden signed into law the FDA User Fee Reauthorization Act of 2022, which extends PDUFA through fiscal 2027.

“We must ensure that there are more resources for the development of endpoints in rare diseases, because that certainly becomes a bottleneck, and that we protect and strengthen the accelerated approval pathway because we know that it’s working,” Kennedy said. “It’s also important that when therapies are approved, there’s an environment that enables patients to get access to those therapies.”

“We need the FDA to be able to consult with outside experts in rare diseases,” she said. “When you’re looking at a product that’s being developed and rare, it’s not OK just to talk to a random clinician. You have to have a clinician that is an expert in that disease. We want to have a formalized process for that engagement.”

In advocating better policies for the rare disease community, Kennedy has an ally on Capitol Hill: the Rare Disease Congressional Caucus. This 198-member group is cochaired by Reps. Gus Bilirakis (R-Florida) and G.K. Butterfield (D-North Carolina) in the House, and by Sens. Roger Wicker (R-Mississippi) and Amy Klobuchar (D-Minnesota) in the Senate.

“This caucus is phenomenal. It’s comprised of members of Congress who have raised their hand to say ‘rare disease is a priority to me,’” Kennedy said.

“We’ve talked about accelerated approval, diagnostics in newborn screening, we look into our tax credits—all issues that members of Congress should be aware of,” she said. “A great example would be COVID, and issues that were coming up during the pandemic that were not specific just to the rare disease community, such as telehealth and mask mandates.”

One of Kennedy’s long-term priorities is to standardize newborn screening across state lines, so that babies are tested for the same panel of rare diseases regardless of where they’re born. At present, which diseases a baby is screened for depends on where that baby is born—a system Kennedy calls “death by zip code.”

She explained that babies are now screened at birth for a list of 35 diseases that appear on the Recommended Uniform Screening Panel (RUSP). To date, that list includes cystic fibrosis, sickle cell disease, Pompe disease, and spinal muscular atrophy (SMA).

“But states don’t have to,” Kennedy said. “It’s only a recommendation; they can choose whether to do it or not. And that’s not because states don’t want to screen. It’s because it’s expensive to screen, different equipment is required, and it takes time to implement those conditions.”

The result is a patchwork of regulations in which millions of babies are not being routinely tested for conditions that have potentially lifesaving therapies—if administered early enough.

“I’ll give you a personal example,” Kennedy said. “My son, who’s adopted, was born in Florida, but I lived in Maryland. At the time, there were 6 conditions on the Maryland panel that were not on the Florida panel. When I brought him home, I asked his pediatrician to screen him for those other conditions. They were serious enough to need to be identified at birth—and had treatments that had he been identified with could have saved or changed the outcome of his life.”

One such condition is SMA, for which newborns are now screened in 48 states, according to the nonprofit group Cure SMA. Only Hawaii and Nevada still do not screen for the disease.

To rectify those discrepancies, EveryLife is leading a state-by-state campaign for RUSP alignment legislation. So far, states that have adopted an “automatic on-ramp” for adding rare diseases to their newborn screening panels are California, Florida, Georgia, Iowa, Maryland, North Carolina, and Pennsylvania.

Kennedy’s goal is that by the end of 2023, more than half of all babies born in the United States will be delivered in states aligned with RUSP. 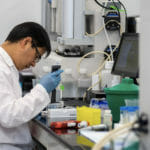