Duchenne muscular dystrophy (DMD) is a severe, X-linked recessive dystrophinopathy caused by mutations to the DMD gene which results in abnormal dystrophin production.1,2 The mainstay of pharmacologic therapy in patients with DMD is corticosteroid treatment, which is associated with improved survival, cardiovascular and orthopedic outcomes, motor function, strength, and pulmonary function.3,4

DMD is a devastating diagnosis for parents, who become members of the multidisciplinary team involved in the care of their child. In my experience, parents themselves will also require psychological support throughout the disease course to cope with the reality and prognosis of DMD.

The first few years of DMD will typically be mild until the patient reaches about 5 or 6 years of age, after which an unrelenting and steady decline commences. Despite disease-modifying therapy with corticosteroids and advancements in cardiopulmonary support, DMD remains fatal, with patients rarely surviving beyond the third decade of life.5,6

Gene Therapy May Unlock the Cure for DMD

Gene therapy is a new frontier for developing treatments for degenerative diseases like DMD and has yielded several novel agents that involve exon skipping or read-through of premature termination codons on dystrophin mRNA. One therapeutic strategy that has received recent attention is the inactivation of myostatin, or growth and differentiation factor 8 (GDF-8), a member of the transforming growth factor beta (TGF-ß) superfamily. GDF-8 in conjunction with other TGF- ß ligands such as activin A, activin B, and growth and differentiation factor 11 (GDF-11) suppresses muscle growth through the Smad2/3 signaling pathway.7 In murine models, disruption to the GDF-8 gene leads to increased muscle mass, which has made it a potential therapeutic target for developing treatments for neuromuscular disorders (NMDs) such as DMD.8 However, preliminary trials of GDF-8 inhibitors have not demonstrated significant clinical improvement in patients with DMD and are associated with unwanted, vascular adverse events such as epistaxis and telangiectasia.9,10 Vascular events are due to bone morphogenetic protein 9 (BMP9) binding which increases signaling through the Smad1/5/8 pathways.10

A novel heterodimeric Fc fusion protein, ActRIIB:ALK4-Fc, sequesters Smad2/3 receptor ligands while only transiently binding BMP9, resulting in a robust increase in muscle mass in wild-type (WT) mice and multiple models of NMDs without vascular adverse events. Gene therapy with this novel agent may be a potential therapeutic option for DMD and other NMDs and has produced positive results in murine models.

In mice, subcutaneous administration of ActRIIB:ALK4-Fc for 4 weeks resulted in a statistically significant increase in body weight in a dose-dependent manner, with approximately a 25% increase for the highest dosage (10mg/kg) compared with approximately 5% for vehicle.  The highest dose of ActRIIB:ALK4-Fc also resulted in a 12-fold increase in total lean muscle mass without changes to fiber type, and a 53% increase in weight of the tibialis anterior (TA) muscle, chosen as a representative muscle in the study. Muscle fiber size increased by 49% which was attributed to muscle hypertrophy and increased generalized protein synthesis in muscle, confirmed with pulse-labeling experiments. These changes correlated with an augmentation in twitch force by 25%, peak tetanic force by 20%, and forelimb grip strength by 14%.11

In the presented study, ActRIIB:ALK4-Fc was also compared with other Smad2/3 pathway inhibitors in 7-week-old mdx and WT mice. After 28 days of receiving either ActRIIB:ALK4-Fc, dual anti-myostatin/GDF11 antibodies, anti-myostatin plus anti-activin A antibodies, dual ActRIIA and ActRIIB antibodies, or vehicle, a statistically significant increase in percent body weight change and TA muscle mass was observed in mdx mice and WT mice. These data indicate that multiligand inhibition in murine models using ActRIIB:ALK4-Fc is superior to other inhibitors of Smad2/3 pathway signaling in normal and diseased states.  Effects of ActRIIB:ALK4-Fc were also evaluated in older mdx mice with more severe DMD signs and produced a statistically significant increase in TA weight. Changes in physiological cross-sectional area were increased in the ActRIIB:ALK4-Fc-treated mice but did not reach statistical significance.11 Circulating microRNAs implicated as biomarkers of disease severity were also reduced in older mdx mice.11,12

ActRIIB:ALK4-Fc may also alleviate acute fibrotic change following muscle injury which may be of additional benefit to DMD patients since the natural history of the disease involves extensive skeletal muscle fibrosis.13  Endomysial fibrosis in injured and noninjured BL10.mdx mice was assessed using Picrosirius red staining of daily TA micropunctures. Results showed that ActRIIB:ALK4-Fc treatment restored collagen staining to levels typical of uninjured controls. These data suggest that ActRIIB:ALK4-Fc can reverse collagen deposition in mdx mice. Since progressive fibrosis of the respiratory diaphragm is a major contributor to respiratory decline in DMD patients, the idea of therapy to halt or reverse fibrosis is exciting.

The most common causes of death in DMD are cardiomyopathy and respiratory failure.6 As the disease course progresses, respiratory therapy becomes an integral component of care and is necessary to clear respiratory secretions and prevent infections. Patients eventually require nocturnal and daytime ventilation and assisted coughing as the respiratory diaphragm and accessory muscles of breathing lose their contractile force. The reality of DMD can sink in after patients lose ambulation, which typically occurs before the age of 12. Another major “wake-up call” for patients and parents alike is the need for noninvasive mechanical ventilation which, as DMD progresses, may be required for 24 hours a day.  This marks the start of a sharp decline in patient autonomy and quality of life and treatment options that can delay or reverse respiratory decline are desperately needed.

The effect of ActRIIB:ALK4-Fc on the respiratory diaphragm was not specifically analyzed in the reported study. Instead, the TA muscle was chosen as a representative muscle. More studies are required to determine if the positive findings observed in the murine TA muscles are mirrored in the respiratory diaphragm. ActRIIB:ALK4-Fc appears to increase diaphragmatic contractility ex-vivo in D2.mdx mice, but the difference did not reach statistical significance compared with vehicle.11 If collagen deposition can be reduced or reversed in a similar manner described in the mdx mice, it could have major clinical implications for patients with DMD. One compelling possibility is the reversal of fibrosis which would expand the list of patients that would benefit from ActRIIB:ALK4-Fc treatment to include newly diagnosed patients and those with advanced disease. This would be the best-case scenario but I would suggest we approach this possibility with a healthy dose of skepticism.

ActRIIB:ALK4-Fc also improved neuromuscular junction (NMJ) function and morphology in mdx mice. Fragmentation of acetylcholine receptor clusters into islets, as seen in mdx mice, was significantly reduced in ActRIIB:ALK4-Fc-treated mdx mice.14 The authors concluded that treatment with ActRIIB:ALK4-Fc exerts a partially normalizing influence on NMJ morphology in mdx mice. These changes were accompanied by slight improvements in reduction in the amplitude of compound muscle action potentials and amplitude drop during repetitive stimulation, suggesting that the stabilizing properties of ActRIIB:ALK4-Fc on the NMJ may provide functional improvement.11 More studies are needed to further investigate this possibility.  The mechanism through which ActRIIB:ALK4-Fc exerts a stabilizing effect on the NMJ is unclear. It is postulated that the Smad2/3 pathway ligands play a key role in the regulation of NMJ homeostasis.11

Novel therapies for DMD that increase dystrophin production are approved for use in the US and Europe. While these treatments can increase the expression of dystrophin in muscle, clinical benefit of these therapies is lacking. Adding ActRIIB:ALK4-Fc to dystrophin-enhancing therapy using M12-PMO resulted in a greater increase in dystrophin-positive fibers in BL10.mdx mice than those treated with M12-PMO alone. These findings suggest that ActRIIB:ALK4-Fc and M12-PMO synergistically improve dystrophin expression in BL12.mdx murine models. In addition to increased dystrophin expression, combination therapy using multiligand Smad2/3 pathway inhibition plus dystrophin-enhancing therapy resulted in a statistically significant increase in peak tetanic force and provided a significant benefit in force generation during repeated eccentric contractions of the TA muscle. These findings are intriguing as they have the potential to translate to clinical benefit in human subjects.

Despite the rapid pace of scientific advancements in medicine and genetics, effective treatment for DMD remains elusive. We have learned from previous trials that, in humans, enhancing dystrophin expression alone is insufficient for improving survival, functionality, or quality of life. Perhaps, a combination of multiligand myostatin inhibition plus dystrophin enhancing therapy may produce true clinical benefits. ActRIIB:ALK4-Fc is an exciting new player in the field of DMD research and we should be looking forward to further studies with hope and cautious optimism. 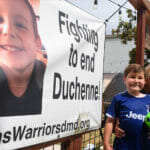