“After we got his diagnosis, I decided to become interested in learning more about muscle research,” Dr. Young told Rare Disease Advisor. “When I went to undergrad at Johns Hopkins University, I began working in a couple of different labs focusing on muscle research, and realized that I enjoyed it. Since then, I’ve dedicated my career to working on developing therapies for this devastating muscle-wasting disease.”

During her undergraduate years, Dr. Young did a summer internship at Leiden University Medical Center in the Netherlands and another one at Sarepta Therapeutics. She went on to the University of California Los Angeles (UCLA) specifically because it had a high concentration of researchers working on Duchenne.

She developed her specific therapy approach, known as MyoDys45-55, while a doctoral candidate at UCLA. There, she worked with Melissa Spencer, PhD, director of the UCLA Neuromuscular Medicine Program, and April Pyle, PhD, vice chair of UCLA’s Department of Microbiology, Immunology and Molecular Genetics.

That led to the eventual founding of Dr. Young’s company, MyoGene Bio, which was spun out of the Magnify Incubator at UCLA’s California NanoSystems Institute in 2019 and relocated to San Diego in early 2022. Dr. Spencer and Dr. Pyle are cofounders and scientific advisers at MyoGene Bio.

“Both my parents have experience in entrepreneurship. They’ve started multiple software companies and a company that analyzes satellite images,” Dr. Young said. “I grew up in a very entrepreneurial-minded household. Even when I was in high school, I taught cooking classes out of our kitchen instead of getting a normal job at the local Dairy Queen.”

A New Approach to Gene Editing for DMD

“The main advantage of our approach in the way we’re tackling Duchenne is by editing the patients’ own DNA for a large proportion of patients with a single therapy, and retaining more of the protein than other gene therapy approaches,“ she said. “It’s kind of a permanent version of exon deletion” that could permanently fix the underlying cause of the disease for half of all Duchenne patients.

MyoDys45-55 is currently in the preclinical stage. It’s still being tested in cells and animal models, and Dr. Young said she hopes to get to clinical trials in humans in the next few years.

“In the beginning, people didn’t know how to run trials in Duchenne to see a proper outcome. It’s pretty variable, so you would either need sensitive outcome measures to check for an effect, or have a narrow target population that you’re treating, because patients of different ages act very differently,” she said. “Also, the loss of dystrophin is a really big deal, so just hitting a downstream effect is likely not going to be enough to change the course of the disease.”

In fact, the large size of the dystrophin gene—the biggest in the human genome—makes it very difficult to replace. In addition, she said, “Duchenne affects all muscles in the body, including heart and diaphragm, so to have an effective therapy, you need to be able to target lots of different muscles after an injection.”

Strategies like exon skipping or CRISPR therapies that target one exon are only applicable for around 13% of patients or less for each approach, she said.

“Our approach will be applicable for around half of all Duchenne patients,” Dr. Young explained. “Additionally, we’re using gene editing to permanently edit the patient’s own DNA. This is expected to be longer‑lasting and maintain the normal regulatory environment, in comparison to other types of gene therapy, where the DNA is added and it doesn’t integrate. It relies on overexpression.”

Furthermore, Dr. Young said MyoGene Bio’s strategy can retain about 87% of the protein-coding sequence, in contrast to the mini- and micro‑dystrophins being delivered by gene therapy that are about one-third of normal size.

“We’re able to retain additional functional domains of the protein that are otherwise lost with some of the other approaches,” she said, noting that her company is using adeno-associated virus (AAV) to deliver gene therapy.

“The benefit is that we’re now permanently changing the DNA when we’re targeting our cell,” she said. “There’s potential that can last longer than just delivering exogenous DNA, which can be lost with cell division. We’ve been testing different ways to dampen the immune response to potentially use it in combination with redosing and improve safety aspects as well.”

Dr. Young said MyoGene Bio has received more than $5 million in grants, mainly from nonprofit patient advocacy organizations such as the MDA, CureDuchenne, and Parent Project Muscular Dystrophy. Her company has also obtained funding from the US National Institutes of Health (NIH), California Institute of Regenerative Medicine, and Duchenne UK.

“We’re currently looking to raise a seed round,” she said. “Basically, that’s why I got into the field, and found that I love working on the disease. It’s a very exciting time to be in Duchenne.” 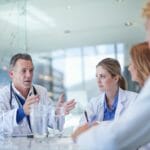