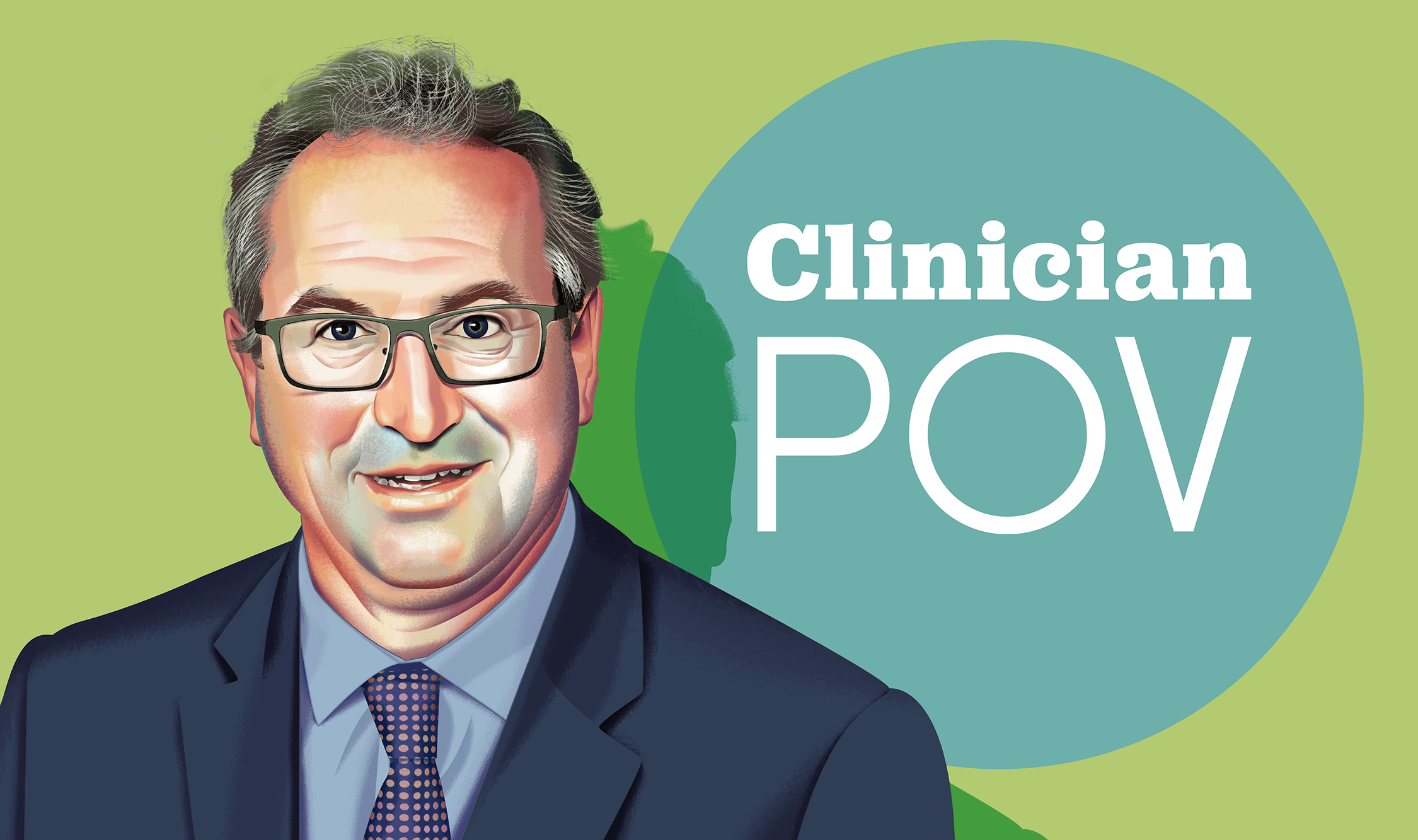 Historically, NMOSD has been managed with corticosteroids and immunosuppressive drugs, such as azathioprine, rituximab, and mycophenolate mofetil. More recently, however, a new generation of therapies has emerged, informed by disease-specific knowledge. For example, as much as 88% of patients exhibit an immunoglobulin G (IgG) autoantibody to the AQP-4 water channel protein, which is abundant in the CNS.1 Binding of this antibody triggers the complement cascade, leading to injury of glial tissues. Discovery of this disease mechanism prompted development of a new line of therapy to block this process by inhibiting cleavage of the C5 terminal complement protein.

The phase 3 PREVENT trial (ClinicalTrials.gov identifier: NCT01892345) represented a landmark test of this strategy on the C5 cleavage inhibitor eculizumab, and the results were published in 2019.2 In 96 patients with NMOSD who were positive for the AQP-4 antibody, treatment with eculizumab resulted in a dramatic drop in disease relapses, which occurred in 3% of patients in the experimental group vs 43% in the placebo group.

More recently, researchers tested whether treatment with ravulizumab-cwvz, engineered from eculizumab to increase its half-life, would deliver similar results. Ravulizumab is the first long-acting C5 inhibitor; it is delivered by infusion every 8 weeks, whereas eculizumab is administered every 2 weeks in the maintenance phase of treatment. In the phase 3 open-label CHAMPION-NMOSD trial (ClinicalTrials.gov identifier: NCT04201262) of this drug, no relapses occurred in 58 patients with AQP-4-positive NMOSD treated for a median duration of 73 weeks.3

Sean J. Pittock, MD, is the director of Mayo Clinic’s Center for Multiple Sclerosis and Autoimmune Neurology, as well as Mayo Clinic’s Neuroimmunology Research Laboratory. His work has been essential to elucidating pathomechanisms in NMOSD. In addition, he is the principal investigator of the multiphase PREVENT and CHAMPION-NMOSD open-label trials of eculizumab and ravulizumab-cwvz. Dr Pittock shared his experiences and perspectives on the past, present, and future of NMOSD therapies.

Can you give an overview of the research and advances that led to C5 protein complement inhibition as therapy for NMOSD?

NMOSD is a serious disorder, characterized by relapsing optic neuritis and inflammation of the spinal cord. If left untreated, about 33% of patients become deceased by 5 years after onset, and 50% of survivors were in a wheelchair and blind after 5 years.4 This is a very severe illness.

The AQP-4 water channel protein autoantibody was discovered in 2004.5,6 This really revolutionized our understanding of neuromyelitis optica. It allowed us to really define the disease entity and to begin understanding the disease mechanism. This is in contrast to, for example, multiple sclerosis. We still do not have a good sense of exactly what is happening in multiple sclerosis because there is no biomarker; we do not know what the pathogenic target is in multiple sclerosis. But in neuromyelitis optica, with the discovery of the water channel antibody, we now suddenly have a target — that is, what the immune system is essentially targeting. That opened up a huge opportunity to understand mechanism.

What we learned through mechanistic studies was that the water channel the antibody binds to actually sits on astrocytes.7 This was surprising because previous work had been focused on the oligodendrocytes, which are the cells that myelinate, and this is a demyelinating disease. However, it turned out that the target — the first-ever target that has been identified for any form of inflammatory CNS-demyelinating disease — actually sits on the astrocytes. When the antibody binds to the water channel on the astrocytes, its major mechanism of injury is activation of the complement system. Activation of the complement causes enzymatic breakdown of the C5 protein into C5b and C5a. C5b action initiates assembly of the membrane attack complex, which injures and potentially kills the astrocyte. C5a is also a strongly inflammatory protein. It is through these 2 proteins, the C5a and C5b, that damage occurs in the context of the clinical attack.

There are many other mechanisms through which injury can occur in the CNS, but the core mechanism, in my opinion, is through the activation of the complement. In 2010, as we began to elucidate the role of the complement in neuromyelitis optica, we reached out to Alexion and conducted an investigator-initiated, open-label trial (ClinicalTrials.gov identifier: NCT00904826).8 We treated 14 patients at Mayo Clinic with eculizumab, and we essentially stopped the disease. We had selected very ill patients for that trial, and it was a dramatic result. That open-label trial led to the phase 3 PREVENT trial.2 This trial showed dramatic results; we essentially had a 94% to 95% risk reduction. Essentially, eculizumab was a wonder drug.

Based on the results of that phase 3 trial, eculizumab became the first FDA-approved drug in North America for the treatment of NMOSD.9 I am not sure what proportion of patients with the disease are using the drug, but there is certainly a growing number of patients being prescribed eculizumab.

“
We called 2019 “the year of NMOSD” because we went from having essentially no approved treatments for a very rare disease to having 3, so this is good news for patients.

Even more recently, results from the open-label phase 3 CHAMPION-NMOSD trial of ravulizumab-cwvz illustrated a statistically and clinically significant reduction in the risk of relapse in adults with AQP-4 antibody-positive NMOSD.3 Can you further discuss this study?

One issue regarding eculizumab is that it has a short half-life, and it has to be given as an intravenous infusion every 2 weeks. A patient with some degree of disability having to go to an infusion center, or even receiving at-home infusion, every 2 weeks is problematic. It is also problematic for patients who are busy, functioning well, and are free of attacks while on this drug because they have to take time off work to get the infusion. In ravulizumab, the eculizumab backbone has been manipulated so that it has a longer half-life and, therefore, only has to be given every 8 weeks. It has been FDA-approved for other indications since 2018 and works well for diseases that are responsive to eculizumab.14 Thus, we thought that if we could get ravulizumab to work in place of eculizumab for NMOSD, this would be a great win for patients in terms of the frequency at which they had to get the infusion. That is what led to the CHAMPION-NMOSD study.

The CHAMPION-NMOSD study is quite novel in many respects, though some people may be critical of its design. It represents a seminal approach to drug design in rare diseases, especially when 1 or 2 drugs have been shown to be a benefit. A crucial question was how to have a placebo group. Even when we had no FDA-approved drugs for NMOSD, there was huge resistance to having a placebo group in the N-MOmentum trial. Eventually, the community came around, and the FDA pushed for a placebo group. The N-MOmentum study was well designed, with a placebo group, and demonstrated a good result. However, once eculizumab had been shown to be a dramatic game changer in this disease, we felt that it would be unethical to have a placebo group in the CHAMPION-NMOSD trial. What we did was an open-label trial, studying time to event (ie, time to relapse) but using the placebo group from the PREVENT trial as an external comparator. That may be considered a little novel, but I think it is very important as we move forward in figuring out how to get drugs to patients who have a rare disease and how we are going to design trials, especially if one drug looks like it is going to work well. One thing to realize is even if we had thought about doing an equivalence trial, or an inferiority trial, we would have needed upwards of 7000 to 8000 patients, and that would not be possible. Hence, I feel this study had a very nice design, and it showed incredible results, with 0 attacks in 58 patients over 73.5 weeks.3 By contrast, based on the placebo responses not only in the PREVENT trial but also in the SAkuraSky and SAkuraStar studies, and also based on the predictive mathematical modeling publications that we have,15 we would have expected somewhere around 40% of the 58 patients to have had an attack in that time frame if not treated with ravulizumab.

Have any real-world differences in efficacy and risks been apparent between eculizumab and ravulizumab?

Generally, no. The sense is that the drugs work in a very similar fashion. For other indications in which eculizumab has been of benefit, such as in paroxysmal nocturnal hemoglobinuria (PNH) and more recently in myasthenia gravis, ravulizumab seems to do what eculizumab does. We were impressed by the risk reduction, which was 98.6% for ravulizumab3 compared to a risk reduction of 94% for eculizumab,2,16 so they are essentially the same.

The most important thing is to weigh the risks with the benefits. It is also important, in terms of the meningococcal issue, to mitigate the risk as best as possible. Patients should be informed that if they have any symptoms suggestive of a meningococcal infection, they should go to an emergency room immediately. In fact, the management and mitigation of meningococcal infection is quite varied throughout the world. For example, how one mitigates it in the United States is very different from how one mitigates it in France. I actually set up an international consortium of experts from around the world to come up with a consensus and agreement on recommendations for neurologists as they move forward in starting patients on this medication. That way, we can make sure we are all coming at it from the same perspective.

What current challenges and future advances do you see for complement inhibition therapy for NMOSD?

It is a good time to be working in the field of autoimmune neurological diseases. We have a lot of drugs coming down the pipeline that can target a variety of immunological mechanisms. In the trials I have been involved in, we had really good results for inebilizumab, eculizumab, and now ravulizumab. We also know that satralizumab works well.

The second problem is that these drugs are very expensive. They cost hundreds of thousands of dollars per patient per year. These drugs work wonderfully, but many patients cannot get them.

Hopefully, we can figure out some ways of helping individuals in countries without access. We hope the industry will find some ways to assist us in doing that. We also need to think about the possibility of other, smaller companies developing similar drugs that work through similar mechanisms, which potentially could be cheaper — perhaps oral medications that would be more accessible and convenient.

In addition, we need to better understand the disease. Even though we have these 3 drugs that work and have been approved for NMOSD, we still have a lot of questions regarding how they work. For example, with complement inhibition, where is the complement being inhibited? Is it across the blood-brain barrier? We know that only very small amounts of the drug are getting into the CNS, but you really need complete complement inhibition for that class of drug to work. So how and where exactly is it working? Furthermore, we occasionally have patients who have breakthrough episodes. Why are those patients experiencing a breakthrough? Interestingly, there are patients of Asian descent who have genetic mutations in complement-regulatory proteins, and they are not responsive to the medication.17 That is very rare, but we need to consider the subset of patients who are susceptible to relapsing. There is a lot to think about.

This Q&A was edited for clarity and length.

Posted by Haymarket’s Clinical Content Hub. The editorial staff of Rare Disease Advisor had no role in this content’s preparation.

Next clinicianpov in Clinician POV